The Guiana Dolphin (Sotalia guianensis) is one of the smaller dolphin species and lives exclusively in South America along a narrow coastal strip from Honduras to Brazil. Due to its near-shore distribution, this species is heavily impacted by human activities. In Venezuela, the main distribution areas are the Orinoco River and Lake Maracaibo. The IUCN classifies the Guiana Dolphin as near threatened (NT). However, at the regional level, the species is classified as vulnerable. Due to the increase in fishing activity along the entire range, but also due to habitat destruction, it is feared that local populations are in danger of disappearing in the near future. Lack of monitoring and control has dramatically worsened the situation for these dolphin populations.

Several genetic and morphological studies indicate that the Guiana Dolphin population from Lake Maracaibo must be considered as a distinct management unit due to differences from the rest of the population. Lake Maracaibo has the highest bycatch rate for this species, with a casualty rate of 180 individuals/year. It is the only known region in Venezuela where a dolphin species is exploited for human consumption. In addition, there are regular accidents at oil pipelines with disastrous consequences for the environment. There are about 15 oil spills per year in Lake Maracaibo, resulting in contamination with heavy metals and other toxins. Initial studies have already shown negative impacts on marine mammals.

Although studies on population size, behaviour and biology are available at the global level for the Guiana Dolphin, such findings are unknown for the Maracaibo population. To better evaluate the extent of the bycatch problem, a monitoring programme is important. 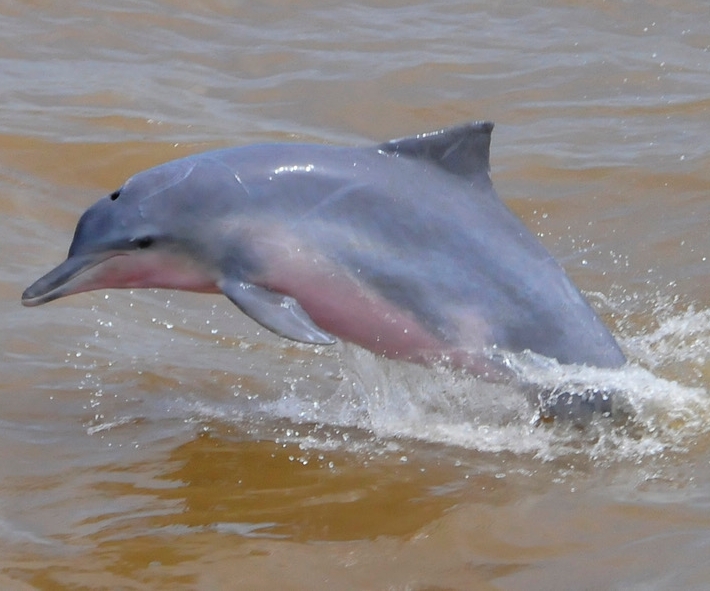 Thanks to the support of YAQU PACHA, various studies on the biology and conservation of the Guiana Dolphin have been carried out in Lake Maracaibo (13,000 km²) since 2016.

Since 2016, data on the number of animals killed by fishing gear has been systematically recorded and consumption by the local population has also been documented. Based on these figures, the mortality rate can be determined more accurately.

In addition, tissue samples of dead animals are examined to determine possible contamination by mercury and heavy metals. These data are relevant to assess the health status of this dolphin population, but also to point out the threat for humans. Initial figures indicate that the levels of some harmful substances are particularly high, so that human consumption of the meat poses a health risk. In collaboration with other NGOs, a campaign has been launched to warn people against eating dolphin meat and thus protect Guiana's dolphins.

Equally important is the recovery of so-called ghost nets, in which animals repeatedly get entangled and die. This work is done in cooperation with various other NGOs, including the Shark Research Centre CIT-Venezuela.

In the field of education, with the support of YAQU PACHA, a poster on the impact of heavy metals on the ecosystem of Lake Maracaibo was designed and distributed to fishermen and other people living there. Other informative posters have also been completed and distributed in recent years. Visiting schools is another crucial part of the environmental education work.