Reintroduction of the Ural Owl

Conservation of the La Plata Dolphin

The first attempts to protect the northern bald ibis (Geronticus eremita) started around 500 years ago. In the 16th century, various laws ensured that, for example, one young bird remained in the nest when it was pillaged and that the birds were not excessively disturbed. Unfortunately, these early beginnings of species conservation were not enough, even if they upheld the ideals of sustainability. During the course of the 17th century, the last ibis went extinct in Europe. The reasons: climatic change and unsustainable use of the animals. Young Northern bald ibis were considered a delicacy and adult birds were also often used as a fasting meal. An admittedly rather dubious honour, which at the time was to worship parts of the animals, saw numerous animals meet their fate. In addition, the so-called Little Ice Age, caused the temperature in Europe to drop, which further reduced ibis numbers. In addition, the "eremita" in the species scientific name, indicates that the solitary ibis was already rather rare in Central Europe anyway. In Spain, France, Italy and Bulgaria, ancient ibis fossils have been found. In the meantime, after being forgotten and moving to the realm of mythical creatures, the ibis was only rediscovered by the so-called Western world at the Red Sea at the end of the 19th century. A short time later, in the 1920s, the first northern bald ibis from Turkey arrived in German and Swiss zoos, but only in very small numbers and with no breeding success. At the end of the forties and in the fifties, wild caught ibis were brought in from Morocco to Europe in large numbers, with which a successful conservation breeding could be established. Later imports from Morocco, now also in the form of offspring from the Rabat Zoo, increased the growing zoo population.

To this day, purely wild Northern bald ibis have only survived on the Moroccan Atlantic coast. Turkey's last wild ibis disappeared in the late 1980s. Since 1977, only individuals relocated and cared for by humans have lived here. A small occurrence of just seven individuals discovered at Palmyra in Syria in 2002 has probably gone extinct, as none of these birds have been seen since at least 2014.

According to the International Union for Conservation of Nature IUCN, there are only 200-249 wild adult ibis worldwide (as of May 1, 2020). The zoo's insurance population, however, includes around 1,750 birds. Since 1988, the Northern bald ibis has had its own EAZA Ex-situ Program (EEP) from the European Zoo Association (EAZA), which is coordinated by the Alpenzoo Innsbruck, within which the zoo population is scientifically supervised, managed and coordinated.

There are currently two reintroduction projects for the Northern bald ibis in Europe. One in the Alpine region (Germany, Austria and Italy), where, with enormous human effort, zoo hatched and raised ibis, are led across the Alps to suitable wintering grounds in Italy, by motorized paragliders. Another project exists in Andalusia. The goal here is to establish a non-migrating population, because due to the climatic conditions in Southern Spain there is sufficient food available for the birds all year round, which consists, to a large extent, of small snails. 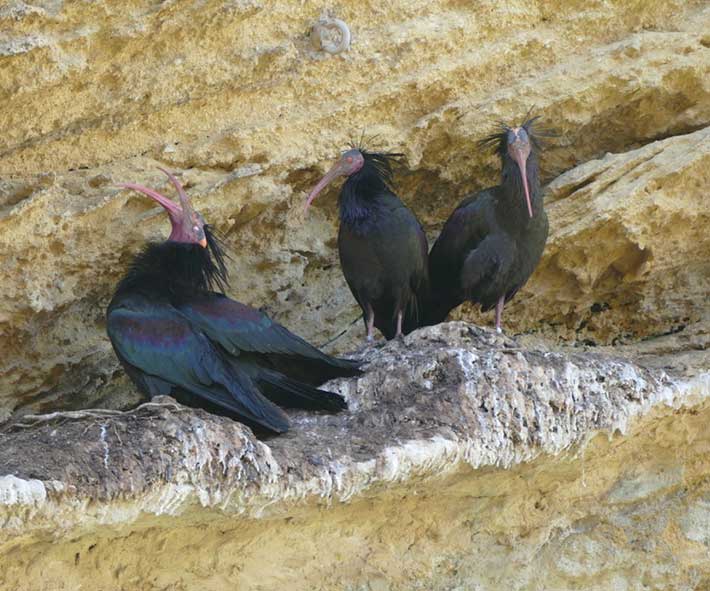 Nuremberg Zoo has been supporting the Proyecto Eremita since 2018 with Northern bald ibis hatched in the zoo. The Zoo also cover all costs associated with the transport of the birds (veterinary medical examinations, transport documents, flight costs etc.). So far, 8 young bald ibis have been released in cooperation with the Proyecto Eremita and the Zoobotanico Jerez de la Frontera. The young Northern bald ibis, which come from various European zoos, are initially kept for a few weeks before they are released into a large aviary, which is located within a military training area on the Spanish Atlantic coast, with little interference. Finally released from there, the now over 100 free-flying ibis have founded three smaller colonies that are used by several pairs for breeding each year. Two of these breeding sites are located in the interior of the rock walls, and the third place, the birds have chosen an old, uninhabited light and lookout tower, directly on the beach. In spring 2018, two pairs were observed at a new breeding site, which is a very good sign that the project is on the right track. El eremita pasa!

Northern bald Ibis are kept and bred in the Nuremberg Zoo. 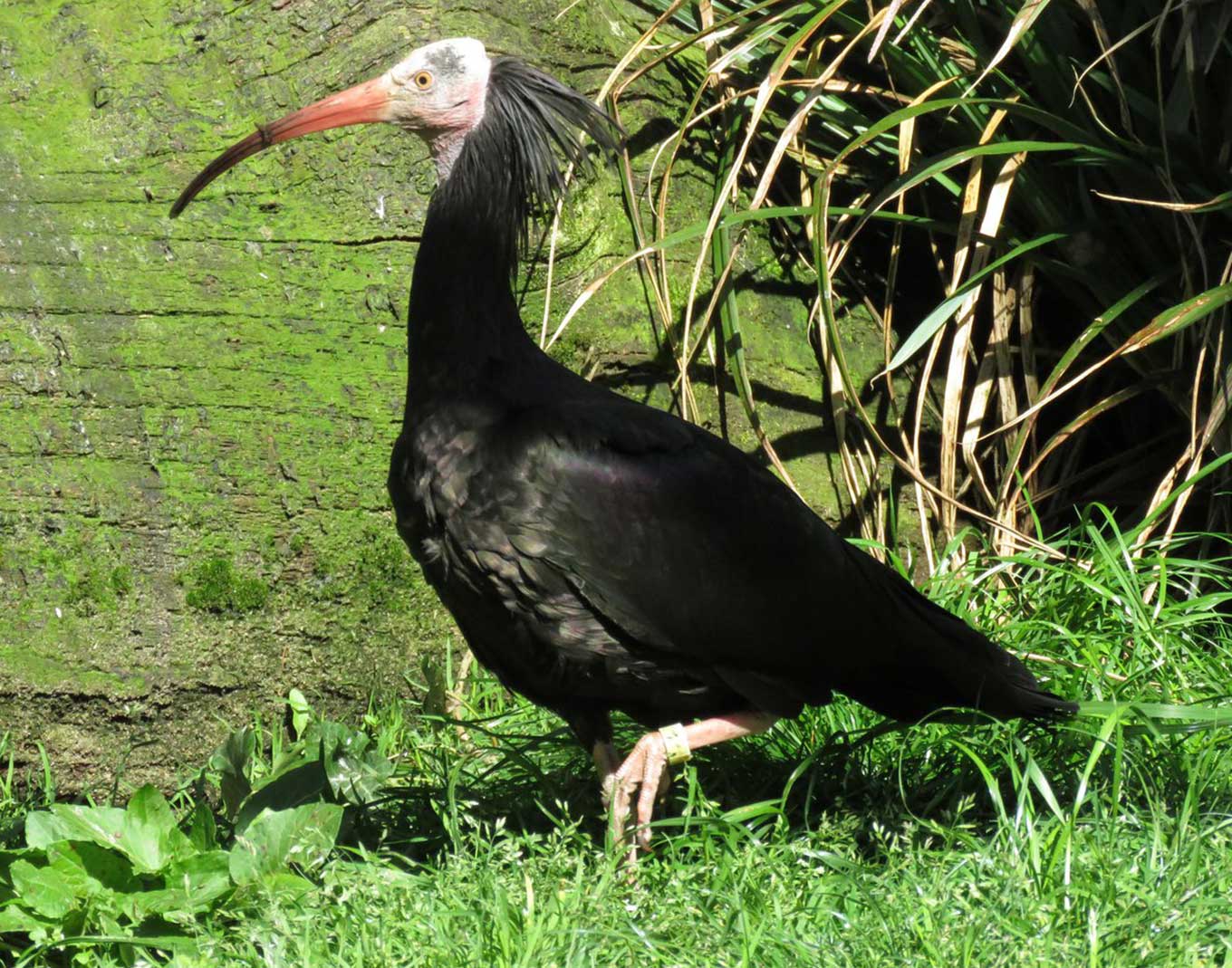 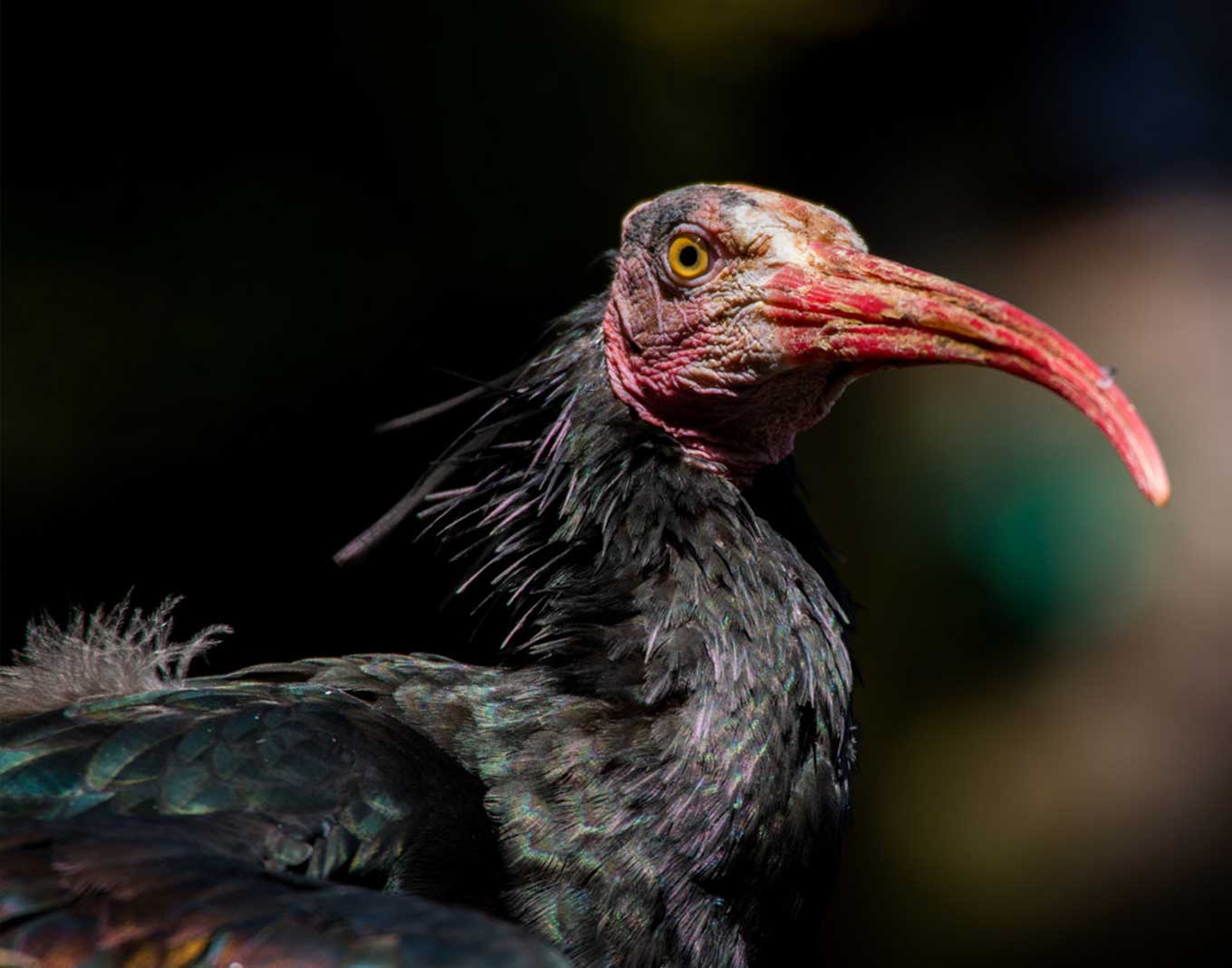 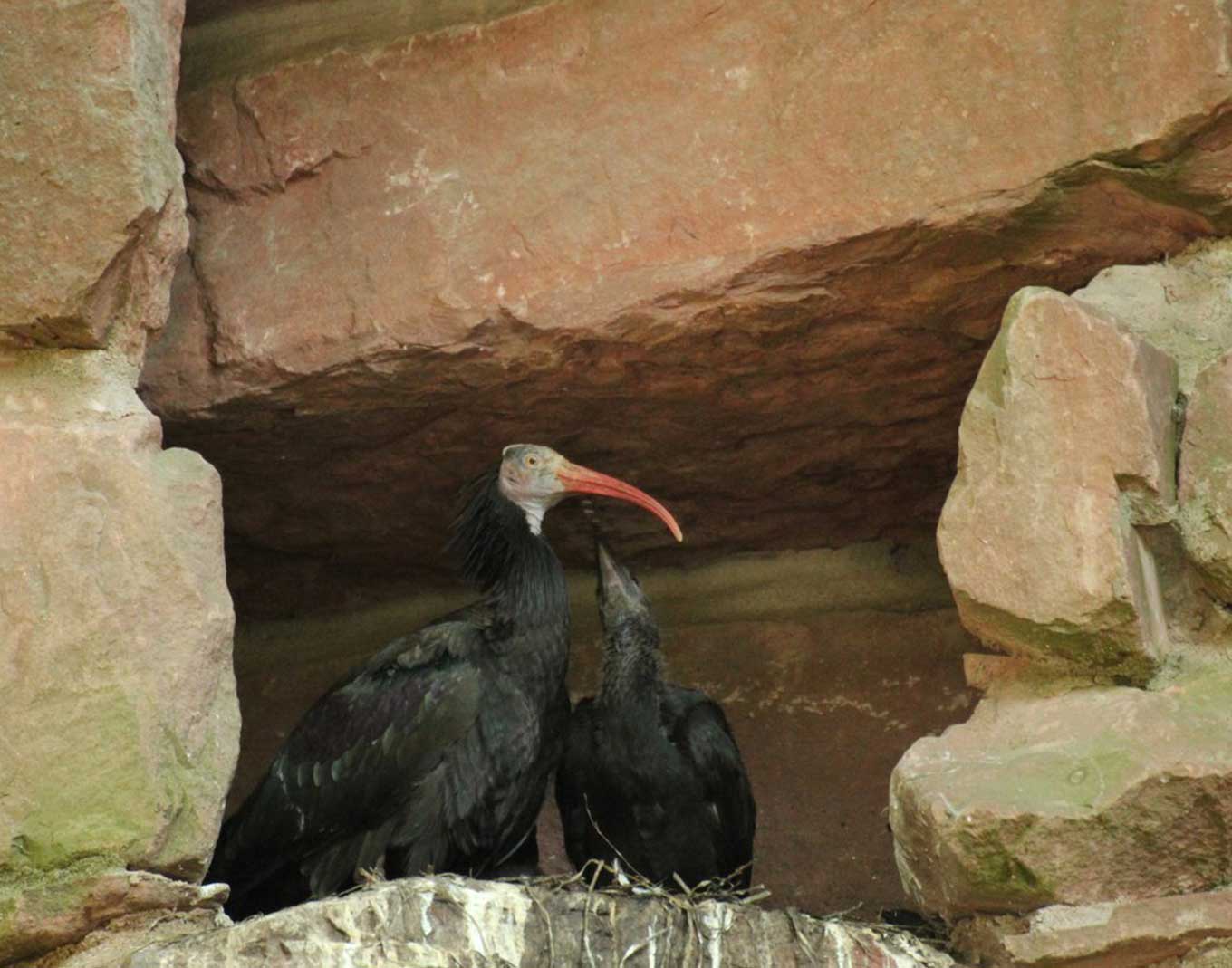 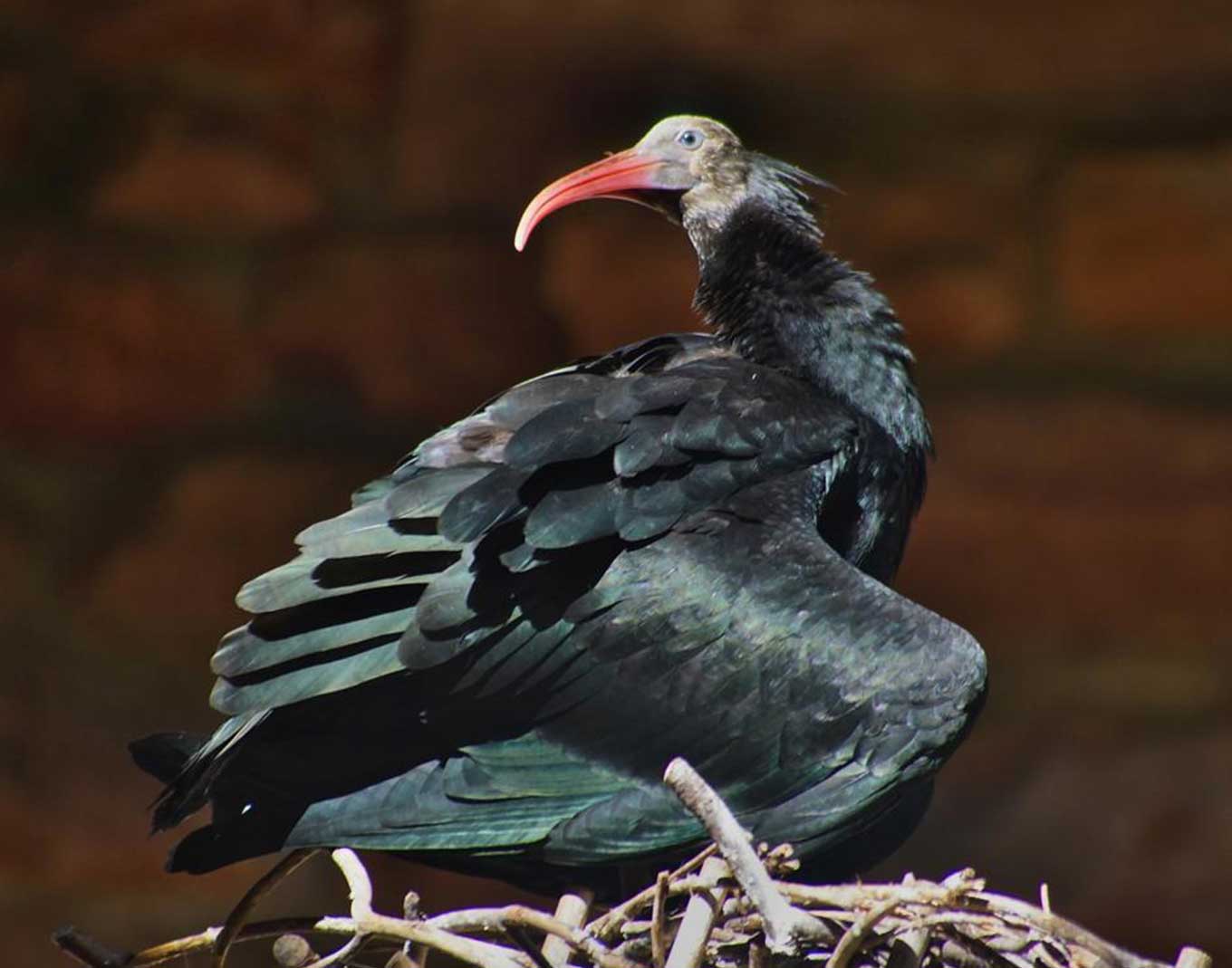 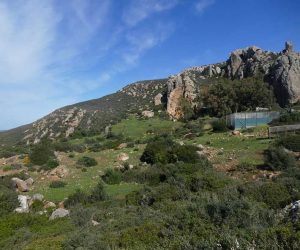 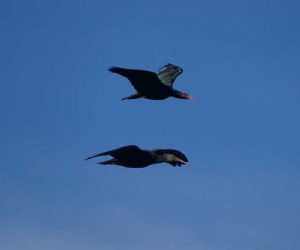 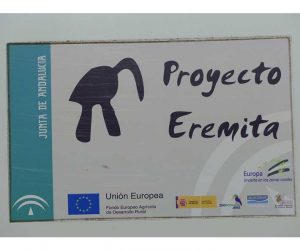 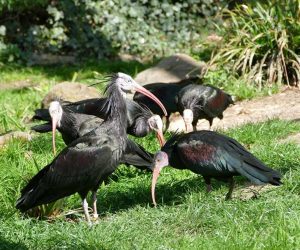