Conservation of the La Plata Dolphin

Ambassador for Species and Habitat Conservation

The La Plata dolphin (Pontoporia blainvillei) is found exclusively in the coastal waters of Argentina, Brazil and Uruguay and is considered the most endangered cetacean species in South America. Five management areas are known, home to an estimated few hundred to around 15,000 dolphins in each area. Since La Plata dolphins mainly live along the coast, they are particularly sensitive to anthropogenic influences. The increasing pollution of waters by toxic chemicals and the regional fishing industry have greatly reduced their population in recent decades. Coastal fishing and the resulting high number of bycatch victims, which make up 6% of the population in some areas, is particularly concerning. By overfishing its prey fish, the La Plata dolphin has already been driven out of some parts of their original distribution area. 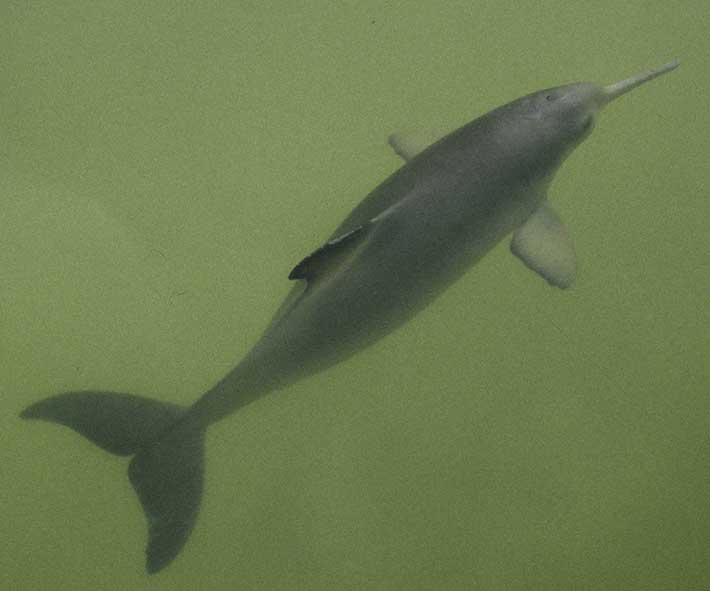 In order to be able to effectively protect animal species, general data on the biology of the species must first be available. For YAQU PACHA e.V. , research into the La Plata dolphin, which is not well known compared to other animal species, was therefore a top priority. For this reason, the society has been working on projects since 1996, aimed at obtaining knowledge about this species. YAQU PACHA's e.V. research projects related to the La Plata Dolphin have primarily focused on three different areas.

How many animals live in the entire distribution area? To answer this question, YAQU PACHA e.V. has helped to finance aerial surveys over the years. La Plata dolphins living in a certain area are counted from a special airplane. An extrapolation has shown that approx. 50,000 animals live in the South Atlantic. Since this method is extremely expensive, new technologies have been developed and used in recent years to determine both the use of the habitat by the animals and to record the number of individuals. The so-called CPODs are used to record and analyse the click sounds that dolphins use for echolocation. Special programs can then calculate how many individuals are living in an area.

Since fishing poses the greatest threat to the La Plata dolphin, it has been important to determine how many dolphins actually die per area, and year, in fishing nets. YAQU PACHA e.V. has financed several projects in which these figures were obtained by observers on board ships. Depending on the area, the bycatch rate has been found to be between 3 - 6% of the total population, which put in danger the long-term survival of the species.

La Plata dolphins share their ecosystem with many people whose livelihood depends on fishing. YAQU PACHA e.V. recognised early on that the protection of this species of dolphin could only be successful in the long term if locals were also involved. To achieve this, YAQU PACHA e.V. developed and implemented numerous environmental education programs aimed at bringing the animal species closer to humans.

Over 25 years of research have provided important insights into the overall population, threats, genetics and general biology of the La Plata dolphins. Environmental education programs in turn have made the dolphin species more well-known and made people aware of the protection of the species not only in South America but also in Europe. Science but also education and the dissemination of information ultimately led to the government of Brazil passing a new fisheries law in 2013. This law has re-regulated coastal fishing, which has helped not only the La Plata dolphin, but also the entire coastal ecosystem in Brazil. The La Plata dolphin has therefore fulfilled its function as an ambassador for species conservation. 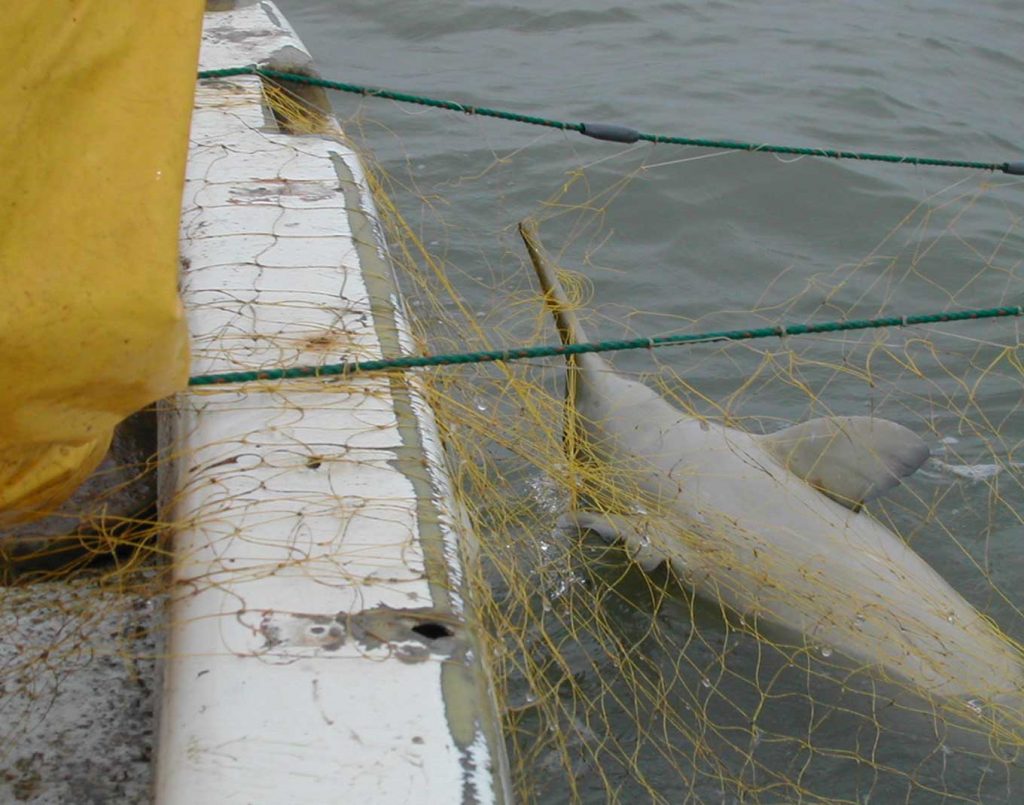 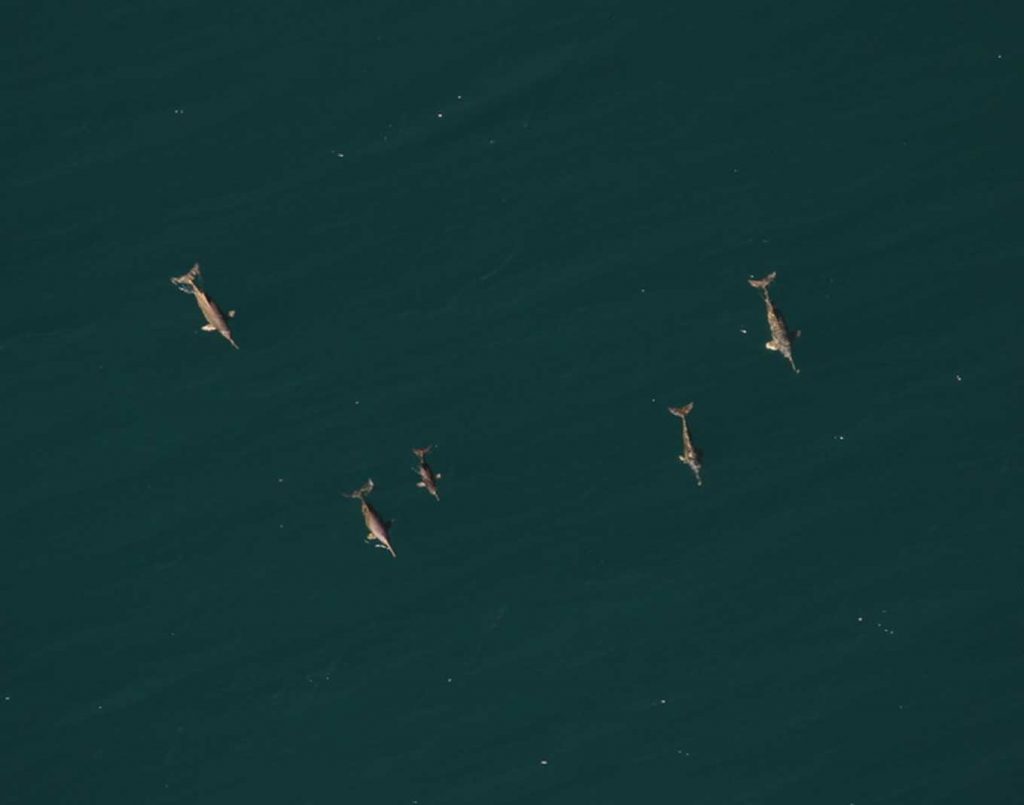 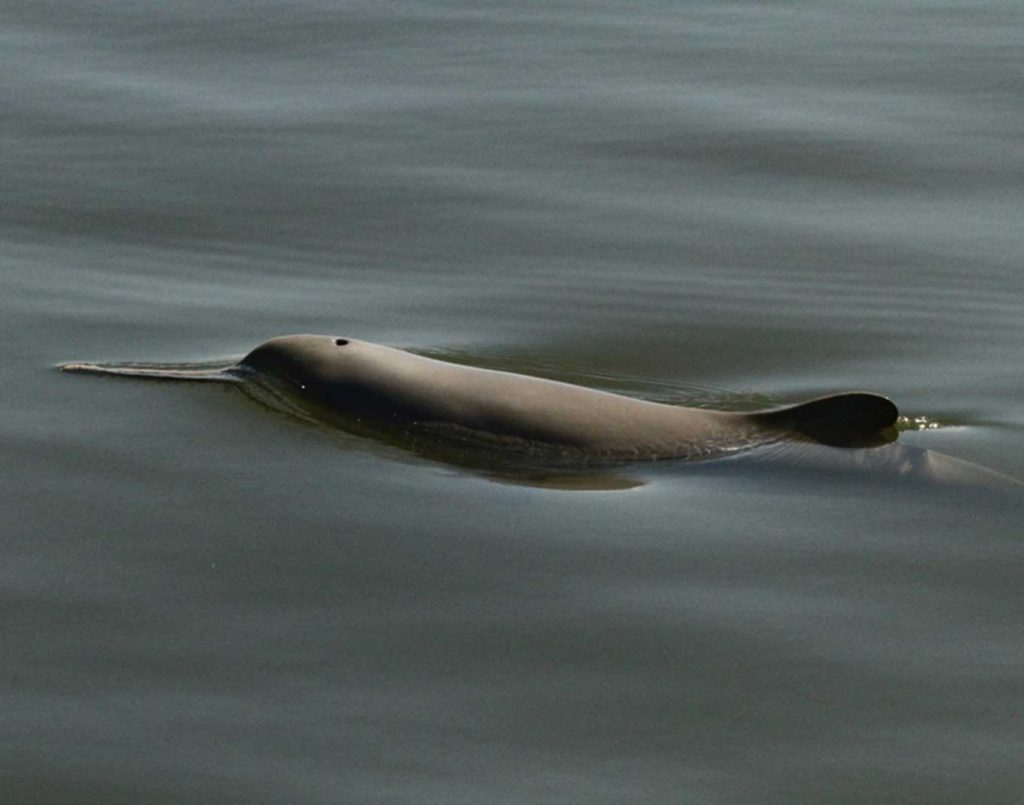 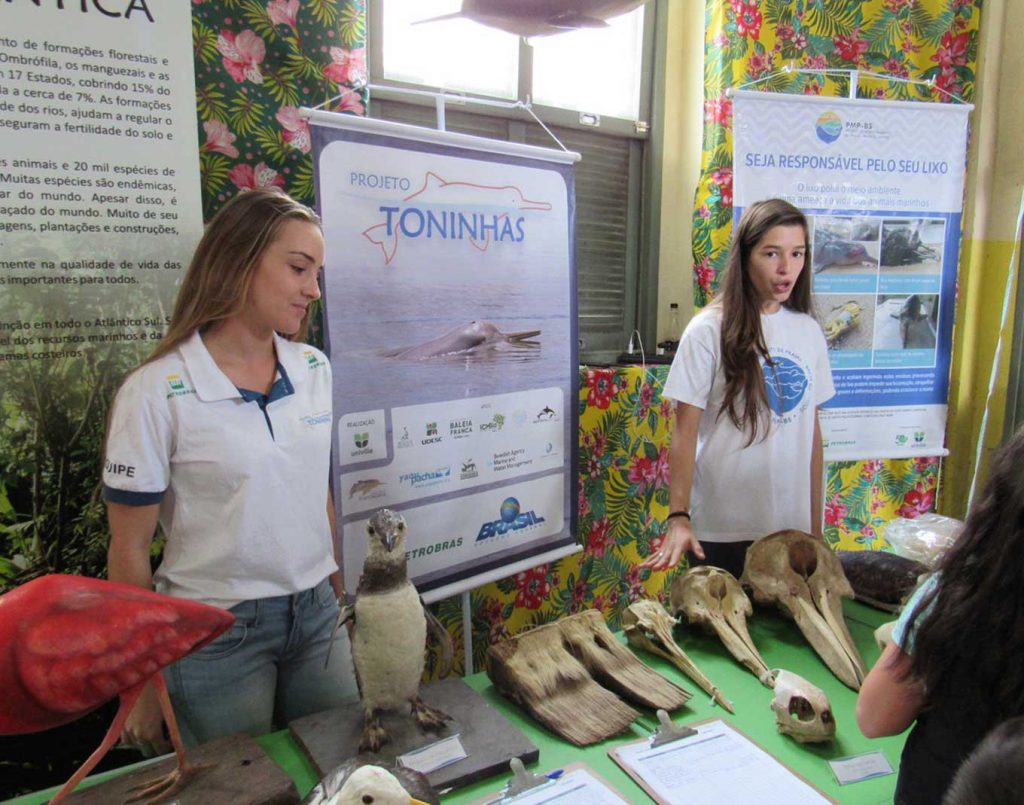 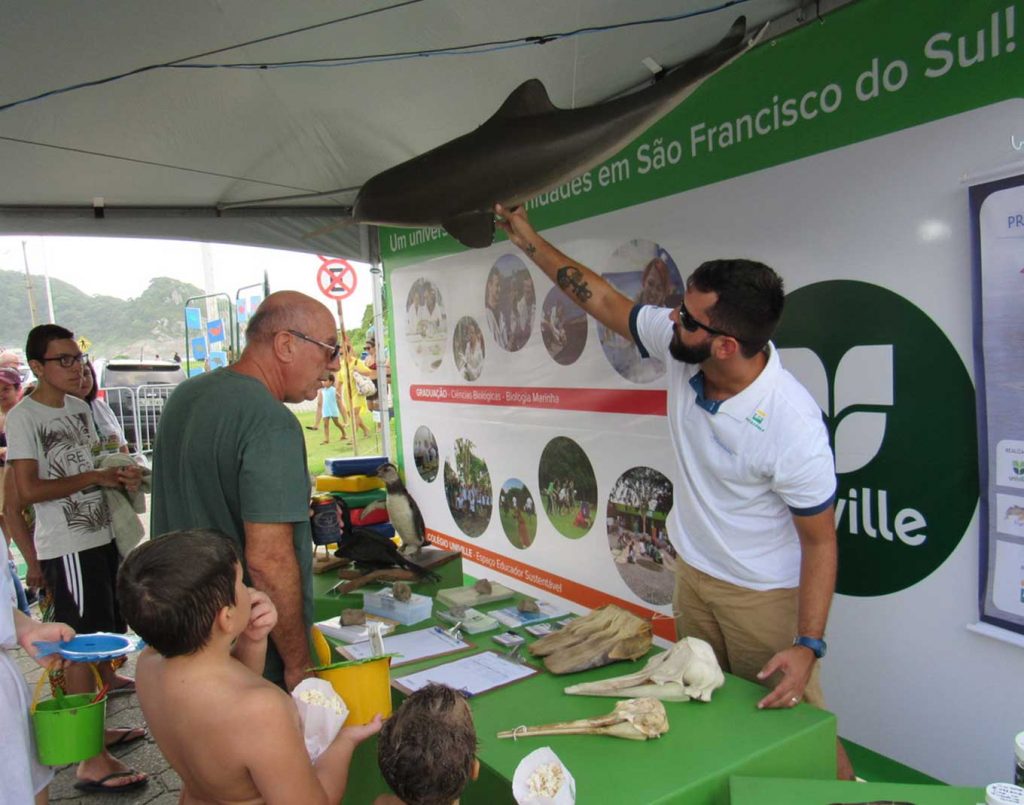 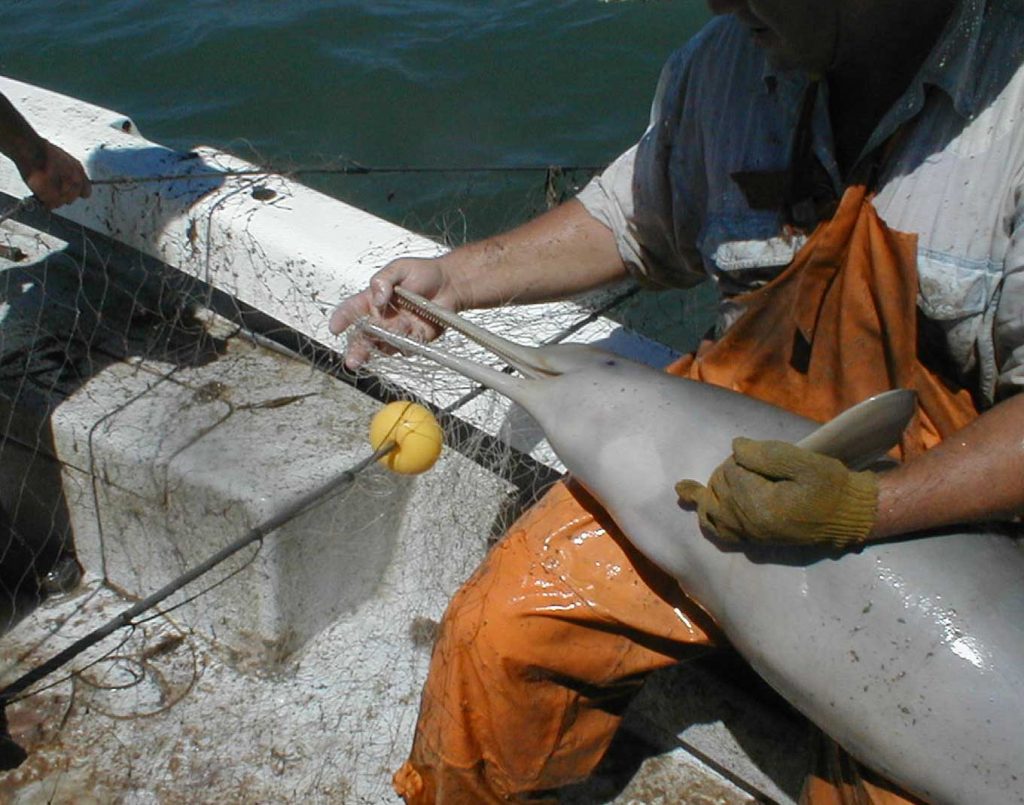 Danilewicz, D., Moreno, I., Ott, P., Tavares, M., Azevedo, A., Secchi, E., and Andriolo, A. 2010. Abundance estimate for a threatened population of franciscana dolphins in southern coastal Brazil: Uncertainties and management implications. Journal of the Marine Biological Association of the United Kingdom, 90(8), 1649-1657.