Bottlenose Dolphins in the Southwest Atlantic: Ignored for a Long Time, now under Serious Threat.

Bottlenose Dolphins of the Southwest Atlantic were recognised in 2019 as a new subspecies (Lahille Bottlenose Dolphin - Tursiops truncatus gephyreus) of the bottlenose dolphin (T. truncatus), which is distributed worldwide. The lahille bottlenose dolphin is endangered due to a number of threats throughout its distribution area (southern Brazil, Uruguay and the Northern Atlantic coast of Argentina). By-catch in the gillnet fishery is recognized as the main threat for these local communities, but other agents such as severe skin-diseases, boat strikes, chemical pollution and prey depletion also impact upon lahille’s bottlenose dolphins. There are no abundance estimates available for the entire SB-U ESU, but mark-recapture studies conducted at several sites indicate that each of these communities is very small (< 100 individuals), and some exhibit strong site fidelity and year-round residency. The sum of available abundance estimates suggests a maximum total population size of 600 individuals. With an estimated 60% of mature individuals, the total number of mature individuals in the species can be estimated at 360, well below the threshold to be listed as Vulnerable under criterion D1. For this reason, the species is now classified as Vulnerable in IUCN Red List and as Endangered in the National Red List of Brazil.

The SB-U ESU is comprised by at least five communities of dolphins with very low levels of genetic diversity and restricted dispersal between them. On the other hand, the Argentina ESU is comprised by a unique small population, potentially declining (due to a low recruitment rate related to a low number of reproducing females) and suffering a historical contraction in distribution.

It is important to note that the lahille’s bottlenose dolphin has long been one of the non-threatened bottlenose dolphins, so little attention has been paid to it. While important information was gained through field studies in the 1990s, the discontinuity of data collection in the following years made it more difficult to use more reliable approaches to investigate other important ecological and biological aspects of these populations. However, systematic long-term field studies with consistent data collection have been established at some locations in the last 15 years, which signifies a turning point in understanding relevant aspects of the species' ecology and provides a more accurate picture of their threat status. 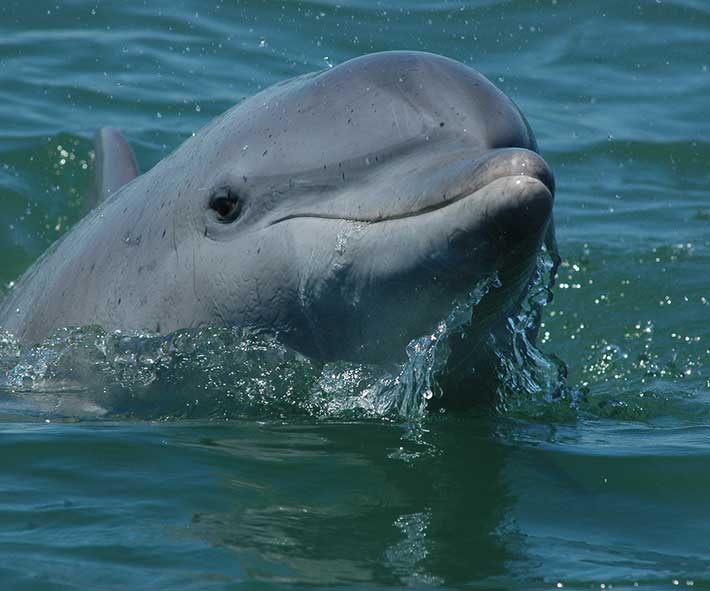 YAQU PACHA e.V. , the species conservation society based in Nuremberg Zoo, played a key role in this turning point. Since 2005, the society has supported a wide range of research activities that focus on, but are not limited to, a long-term monitoring program for the Lagoa dos Patos population in southern Brazil. As part of the long-term surveillance program for bottlenose dolphins, YAQU PACHA e.V. supported photo identification, genetics and bioacoustic studies. These make it possible to determine population trends in terms of abundance and reproductive parameters, habitat use (and their overlap with fishing activities), genetic diversity and pollution, and also understanding the social structure, food behavior and communication of the dolphins. YAQU PACHA e.V. also finances part of the beaching monitoring program, which has been in existence for over 30 years. This data makes it possible to identify trends in natural mortality, but especially in bycatch. Biological sampling of stranded animals also provides important insights into the lives of the species.

YAQU PACHA e.V. has also supported other research initiatives in other locations within the species distribution area, e.g. along the coast of Uruguay and other places in the south of Brazil. Thanks to these studies, it is possible to define population fluctuations and trends for the respective areas. This, combined with other data, ultimately led to the lahille’s bottlenose dolphin being classified as vulnerable on the IUCN Red List (Vermeulen, E., et al., 2019). Last but not least, it is important to point out that YAQU PACHA e.V. was the main sponsor of two workshops on research and conservation of the bottlenose dolphin. YAQU PACHA e.V. has also supported students for years to take part in international conferences or to learn new research methods at leading research institutes. These initiatives have been crucial in raising awareness for the species and building a solid, trusting relationship between researchers. Thanks to these activities, we have now established an international, multi-institutional research network in South America that works in a coordinated manner to study and protect the lahille bottlenose dolphin. In summary, the support of YAQU PACHA e.V. has helped South American scientists to collect and evaluate fundamental information. This has resulted in more than 20 scientific publications, in internationally renowned journals, as well as in the establishment of a protected area in southern Brazil, with the aim of reducing bycatch.